Put simply, mastitis refers to inflammation of the mammary gland (udder). Mastitis is generally considered the most costly production disease of dairy cows. It affects the farmer financially in several ways;

Most inhibitory substance grades are caused by intramammary antibiotics.

Clinical mastitis is characterised by the following;

-Rapid onset, heat, swelling, reddening, or hardening of infected quarters. This is painful.

-Visible abnormalities in milk, including clots, flakes, or discolouration.

-The cow may be lame due to swelling of the udder

Subclinical mastitis is characterised by the following;

-No visible abnormalities in milk

-In some cases, periodic episodes of clinical mastitis in affected cows

Chronic mastitis: persistent or recurrent with mild or no clinical signs

Gangrenous (black) mastitis – This is caused by certain bacteria that produce nasty toxins restricting blood flow to the affected quarter. This results in a blue/ black quarter that is cold to the touch. The toxins from the bacteria and the dying udder tissue are absorbed into the body and consequently these cows become severely ill and often go down.

Antibiotics are usually unsuccessful as they have no effect on toxins. The majority of animals with black mastitis are euthanized or die.

Structure of the Udder and Milk Synthesis

The udder is derived from a highly modified sweat gland. Milk is produced by small, sac-like structures deep within the tissue called alveoli. Each milk producing cell is surround by muscle, which when stimulated by oxytocin, contracts and squeezes milk into the gland. The milk then flows into the cistern and down the teat.

Milk synthesis is a complex process that involves the rumen, liver and udder. The liver produces glucose from products of remen fermentation. The glucose is transported to the udder where it is converted into lactose. The amount of lactose in the milke controls milks volume. 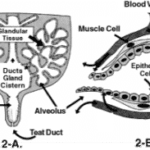 Milk protein & casein is also made in the udder from components of rumen fermentation. Milk protein concentration is determined by the amount of energy rather than the protein in the diet. Milk fat is synthesized in the udder as well. The components are derived from the fermentation of fibre in the diet, bypass fat and the mobilisation of body fat (during early lactation). Adequate fiber is therefore essential for milk fat production.

How does mastitis affect milk synthesis and quality?

When the udder becomes infected and inflamed there is significant injury and damage to the milk producing cells of the udder. The cow’s immune system responds to the infection by sending billions of white blood cells (pus) into the udder. It is the white blood cells that make up 98% of the somatic cell count. Infection = increase in SCC. In addition to this influx of cells, there are significant changes in milk composition such as decreased lactose, protein and fat and increased salt. Several enzymes leak into the milk from the damaged cells. This leads to rapid breakdown and rancidity of milk.

The influx of cells that occurs with infection provides a measure of milk quality and can be assessed by either counting them in 1000’s per milk or using the Rapid Mastitis test (RMT – see notes). Similarly the increased salt concentration improves the conductivity of milk and is the principle for electronic mastitis testers.

As a result of all these changes, milk from cows with mastitis is not suitable for the production of certain products and for this reason the dairy companies have payment incentives and penalties in place.

The majority of mastitis is caused by 2 different species of bacteria; Streptococcus uberis & Staphylococcus aureus.

-SCC are not as high as with staphylococcus infections

-Main cause of heifer mastitis

Changes in the behaviour of the animal; slow to walk in, lame, kicking cups off

Changes in the milk; watery, blood, clots or flecks

Clots on the filter sock

Used to identify which quarter/s is involved, screening for milk quality, SCC after calving before putting cow’s milk into the vat

Works on the salt levels within the milk. Many are available. Care is required with interpretation.

When to Use each Test

After Calving – After the compulsory withholding period of 8 milkings, test cows with RMT or mastitis meter before adding their milk to the vat. Heifers may take up to 10 days before SCC is down and RMT is negative. Introducing heifers into the too early after calving is often the reason for getting high SCC grades early in the season when milk volume is low

High Bulk Somatic Cell Count – strip all cows before cupping to find infected quarter/s. If nothing detected, use RMT or conductivity meter on whole herd

Control and Prevention of Mastitis

Cows are very susceptible to infection around calving because their natural defense mechanisms are low. New infections occur, and subclinical infections which have persisted through the dry period may flare up into clinical cases. Induced cows are even more vulnerable to mastitis infections because their immune systems have reduced efficiency at that time.

Around calving, the udder is often filled with milk for relatively long periods without the flushing effect of being milked. Bacteria may enter the end of the teat, particularly if high udder pressure opens the teat canals. They can then multiply and establish infections. High numbers of environmental mastitis bacteria may contaminate teats, especially if udders are wet and exposed to mud and manure. This can happen easily when cows and heifers are on the ground during calving.

Because of the high incidence of mastitis in the first month after calving, special care in this period will pay off.

Draft springing cows (transition cows) into a separate mob
Give a bigger break to avoid pugging and contaminating the environment
Need to feed well above maintenance to allow for the rapidly growing foetus. Introduce some of the feed that will be given after calving, to give the rumen flora time to adjust to the new diet
Any cow or heifer really tight and dripping milk can be milked just enough to take the pressure off. Teat spray thoroughly afterwards
Once calved, separate immediately from calf and milk out properly
Oxytocin can be used if animals are reluctant to let their milk go after a few milkings, or in case of mastitis. It will aid in milk let-down and emptying of the glands.
Lactation Management

Apply at every milking for the entire season. It is one of the most effective cell count and mastitis control measures available, if applied correctly
To be effective the spray needs to be applied as soon after cup removal as possible
Failure to cover the whole teat of every cow at every milking is the most common error in teat disinfection
Use a high concentration (30%) of emollient during the first few months to prevent cracking which can harbour bacteria
Treating Cows

Mastitis cows should always be kept separate from the herd, and milked and treated last. A cluster that has been on a mastitis cow can potentially infect the next 8 cows being milked on that cluster!
Disinfect cluster and hands before moving to next cow
Milking Machines

Get machines checked at least once a year. Teat end damage, black pock, sore and teat end eversion are signs there may be issues with the milking machine or milking management.
Dry Cow Therapy

The most effective way to treat contagious Staph mastitis
Reduces dry cow mastitis to virtually zero
It is now compulsory for farmers to have an annual Dry Cow Consultation with their veterinarian who will help you decide which product to use and which cows to treat
Culling
Strategic culling of repeat offenders
R.M.T. Guide and Instructions

Most intramammary infections are subclinical therefore clinical examination of quarters cannot be used to differentiate between infected and non-infected quarters. The Rapid Mastitis Test (RMT) is a quick, cheap & simple test that can be conducted cow-side to help detect subclinical mastitis.

A positive reaction from a subclinical quarter/s will form a slime/gel. The greater the inflammation the thicker the slime

NB: The RMT test is a subjective measure of subclinical mastitis. What I may call a 3 a second observer may call a 2. The accuracy of the result will improve if the same person is performing the test regularly.

Recording the Test (see over)

Quarters with scores of 2-3 require treatment

To our wonderful clients, we are working hard to keep you and our team safe during this current climate. Unfortunately, even with protocols in place, people are still being impacted by this illness and that includes our team. We are managing this the best we can but there are times when we are not fully staffed.

Please be advised there may be longer wait times, days where we cannot offer our full range of services, and changes to our usual hours. Please be patient with us.We may have to reschedule your appointment at short notice as we take care of our staff too. We are sure you will appreciate that we are working exceptionally hard to provide the best care for your pets.

Thank you for your understanding and we will keep you updated as we work through the next few weeks.