Masses within the mammary chain of animals can suggest serious mammary cancer and should be checked by your veterinarian when first noticed.

Clinical signs of mammary disease may include:

The cause of mammary masses is unknown but generally linked to an animal’s heat cycle. The mammary tract is composed of duct tissue, connective tissue, and secretory tissue to produce milk. During each heat cycle the mammary tissue is stimulated for production of milk in case of pregnancy. In a course of your pet’s life this stimulation during heat cycles can promote the chance of mammary tumours. Masses can be benign or malignant. Masses can occur in spayed females, although less commonly. In males masses have been reported rarely. Mammary tumours are generally seen in animals over 5 years of age. Malignant mammary tumours do metastasize rapidly, typically going into the local lymph nodes and then into the lung fields.

There are other syndromes that can cause mammary nodules and swelling (e.g. Mastitis, mammary hyperplasia, lactation, other tumour types), so your veterinarian may suggest diagnostic tests to help determine the cause of the masses.

The goal of treatment is to obtain tissue biopsy and potentially remove the cancer from the mammary tract. Excisions from mammary tumours are usually large to try to remove all presence of the tumour. 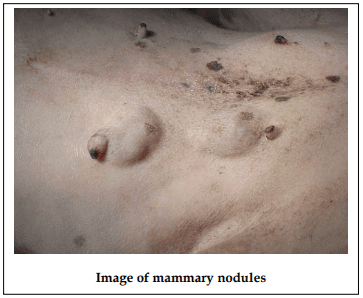